The Geoff Johns and Gary Frank created Geiger comic books feature many characters spanning four centuries. At various times, these characters invariably get referred to as “The Monster” or “The Beast.” These references may come from an interview with the graphic novel series creators, the books themselves, or supporting materials on the world in which the storyline takes place.

For example, the King of The Camelot, also known as one of the Kings of Las Vegas in the ever-expanding Unnamed Universe, only gets called by his real name once. It happens in Geiger issue number four when the King visits his mother, The Queen, also called the beast, but only by her son. She calls him by his given name – Jeremy.

However, the supplementary materials for the graphic novel’s issue number four refer to the unknown monster that lurks under Las Vegas. The “monster” refers to the Queen of The Camelot, imprisoned by her evil son Jeremy, who enjoys inflicting terror on his obese and ill mother by opening the dungeon’s skylight to emit radioactivity onto his mom.

One pane of the story shows a photo of the King’s parents, revealing the once beautiful Queen and her handsome husband. In this glimpse, the reader comes to realize that her son created the “beast” to which he refers by torturing and shackling his surviving parent in the dungeon.

The other reference to The Monster, also referred to as The Beast, refers to the lead character, Geiger. He’s called by so many names across the seven issues of volume one that you need to make notes. In the earliest stories of the Geiger saga, you learn that the other survivors of the nuclear attack consider him a monster or beast because he can walk the desert without a suit to protect him. 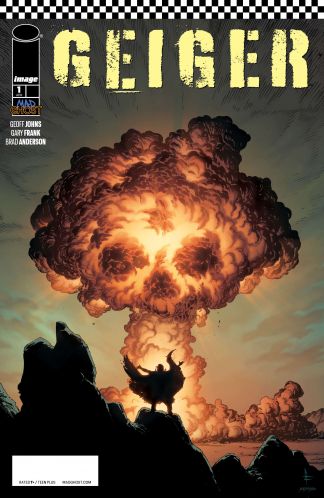 Those who guess that the terms refer to Barney, the adorable two-headed wolf, get it wrong. Geiger’s pet just stays adorable and protective throughout the storyline.

The robot, Junkyard Joe, gets referred to as a monster. Poor Joe. When initially programmed and brought online in 1972, his only mission goals related to protecting the USA and doing good. The Vice-President and President in 2050 have his remnant reprogrammed. The robot loses his initial goodness, and they send him to try to destroy Geiger’s chance of making things right in issue six.

US Billionaires like Bill Gates and Jeff Bezos get even richer