With the absurd increase in the prices of top-of-the-line cell phones, the search for Lite versions is increasing, which bring some cuts to deliver a better cost-benefit ratio. The most popular of Samsung is the S10 Lite, which fell in the taste of Brazilians for having a balanced set without charging a fortune. But is it a better buy than Xiaomi’s Mi 10 Lite? Let’s check it out.

The first point that manufacturers make savings in the Lite versions of their top of the line is the finish. The S10 Lite loses the glass back of the rest of the family to sport plastic. In the Mi 10 Lite we have a glass rear, but the sides are plastic.

In terms of design, we have a difference in the notch approach. Xiaomi bet on the classic drop format, while Samsung adopted a hole in the screen. The S10 Lite has thinner edges, and this makes it slightly more compact, as well as being lighter. The Mi 10 Lite has more advanced protection against scratches and falls thanks to Gorilla Glass 5.

Each can be found in three color options. The Galaxy has an iridescent effect, while the rival bets on shiny paint. The rear cameras are organized in a bouncing block, being larger in the S10 Lite, despite the Korean model having one camera less.

The Galaxy has a microSD slot and the Mi 10 Lite comes with P2 input, what is most important to you? In terms of connectivity technologies, there is an advantage for the Chinese model as it has the latest Bluetooth, 5G and infrared emitter.

We started the comparison with the first point for the Mi 10 Lite. 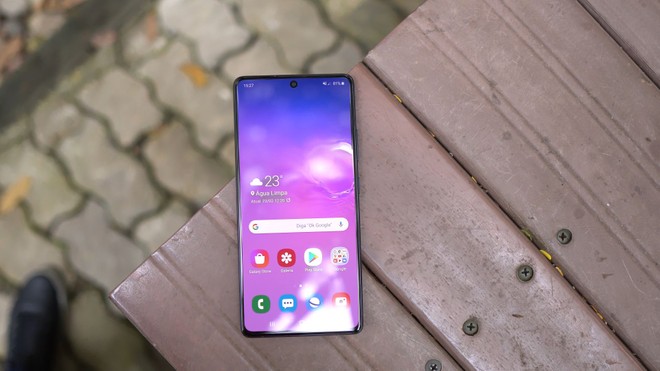 Xiaomi has invested in a good AMOLED screen for the Mi 10 Lite, but not enough to overcome the Super AMOLED Plus of the S10 Lite. The Galaxy’s screen achieves brighter brightness and has better color reproduction, but both have infinite contrast with perfect black and wide viewing angle. HDR10 is also supported on both, which ensures you enjoy HDR videos on YouTube and streaming services.

The sound part is disappointing due to the absence of stereo sound. The Galaxy delivers more power, but abuses the treble for that. Not that the Mi 10 Lite offers balanced sound reproduction, but it is possible to notice a slightly more full-bodied audio. Either way, none is suitable for listening to music. At least the S10 Lite comes with a headset that helps to resolve the speaker limitation.

We give a tie in sound and an extra point to the S10 Lite per screen. 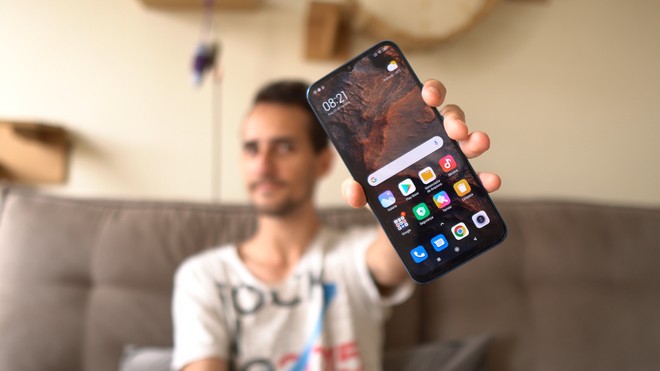 Both have Android 10. Samsung has been betting on One UI, an interface as full of features as Xiaomi’s MIUI, but which responds better and does not keep killing apps in the background to favor the battery.

The Mi 10 Lite has cool features that you won’t find on the Galaxy, like the remote control app, but there are others like the customization of Always on Display to flash the edges of the screen when you receive a notification.

A big advantage for some is the guarantee of three Android updates. While the S10 Lite will arrive at version 13 of the robot, the Mi 10 Lite will hardly pass 12.

Point to the Galaxy in software. 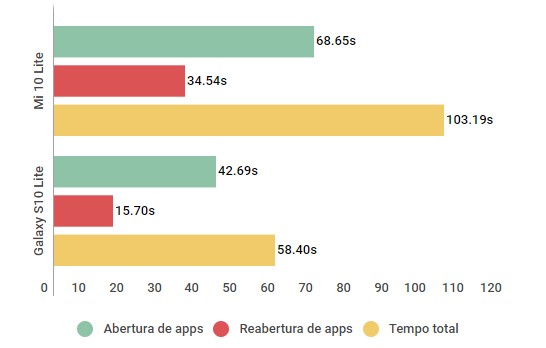 Here’s the first big difference between the two: Qualcomm’s hardware. Xiaomi chose the Snapdragon 765G, which is an intermediate solution with 5G connectivity. Samsung bet on the Snapdragon 855, which despite being 4G has greater firepower. And that was clear in our speed test with the Galaxy being almost 1 minute faster in multitasking.

In benchmarks we also have an easy win for Samsung. The Snapdragon 855 achieves larger numbers and in the case of AnTuTu it exceeds 100 thousand points of difference. And which is better for games? Whatever. All the games we tested ran at maximum quality on both. In PUBG it was even possible to get close to 60 fps in the S10 Lite, but when the phone heats up, the fluidity drops to the level of the Mi 10 Lite.

The Galaxy takes point in performance. 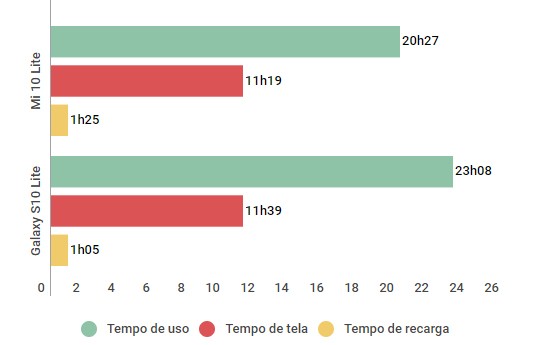 Xiaomi is usually more generous in battery with its cell phones, but here is the Galaxy that has the biggest capacity with 4,500 mAh versus 4,160 mAh. In our tests this resulted in 3 more hours of autonomy for the Samsung side, which gives a difference of 15%. What matters to most is that they both deliver battery for a full day of use.

However, the Galaxy’s battery not only lasts longer but also recharges faster, taking 20 minutes less to go from 0 to 100%.

With that, we double-point the S10 Lite.

The Mi 10 Lite has an extra camera, which is dedicated for background blur. The main sensor of both has 48 MP, but the quality in capturing photos is not the same. The Mi 10 Lite takes advantage with sharper images and better color registration. It is also better for shooting at night with clearer photos and less noise, not to mention its more efficient night mode.

The S10 Lite’s ultra-wide camera takes better pictures, but suffers from more aggressive distortion in the corners of the images. The macro camera of the Mi 10 Lite has the advantage of offering automatic focus, which reduces the limitation of the macro of the S10 Lite of having to be always 5 cm away from what to photograph. And even though it doesn’t have a dedicated camera for blurring, Samsung’s phone doesn’t do ugly close to its rival.

Mi 10 Lite gets the better of rear cameras.

Photos taken with the Mi 10 Lite

The Galaxy has a front camera with twice the resolution, but don’t expect twice as much sharpness in selfies. During the day the two record images with similar quality, but at nightfall is where the Mi 10 Lite shows to be superior, even having a smaller focal aperture. You can even resort to night mode on the Galaxy, but you’ll end up with grainy selfies. Both have good background blur with portrait mode.

And one more point for the Mi 10 Lite on camera.

Who has the best camcorder? Both record in 4K, but the Galaxy allows you to shoot at 60 fps at this resolution. In Mi 10 Lite you will have to reduce to Full HD and with that you will have a slower focus. The Galaxy has better stabilization and audio capture, but the Xiaomi is superior in sharpness, especially indoors and at night. Another advantage of the Mi 10 Lite is that it allows you to shoot in slow motion from the front.

We tie the camcorder.

The Mi 10 Lite was not officially launched here, so if you decide to go from Xiaomi you will have to buy it via the gray market at around R $ 3 thousand, being almost R $ 1 thousand more than you currently pay for the S10 Lite. There is the option to import through TudoCelular’s partner stores, such as Banggood, which is much more affordable than Samsung’s rival, but it is still necessary to take into account taxes and other import fees.

The Mi 10 Lite is an interesting phone, but the S10 Lite delivers a better set overall and is easier to find in the domestic market. The Samsung model has a better screen, more powerful sound, a three-year update guarantee, delivers better performance, its battery lasts longer and films with superior stabilization.

The Chinese model stands out for having 5G and having a better set of cameras for photos and videos. Is it worth importing? Well, it’s up to you to decide, but for most the S10 Lite will be a better buy.

Post strike involves an finish after meeting of unions on this...