In the early days of the Covid-19 pandemic, the editorial board of the Financial Times  (4/20/20), perhaps the most important newspaper of capital in the English-speaking world, fretted about how the pandemic could upend labor relations. After the Black Death of the 1300s, the paper noted, the population decline meant surviving peasants had the leverage to demand higher pay. The editors assured their readers that nothing so radical was coming due to Covid-19: “A thankfully much lower mortality rate means such a transformation is unlikely,” the editors said.

The New York Times (5/7/21) offered a dramatic front-page graphic showing that while the “leisure and hospitality” sector continues to recover—but still has a long way to go to make up massive job losses—other sectors, like manufacturing and retail, have been largely stagnant since last summer. The paper reported how this is becoming a partisan headache for the Biden administration because Republicans have leapt on the jobs numbers to complain that his public spending has hurt employers. (The graphic also showed that state and local governments have rehired very few of the million+ employees they laid off last spring, but the idea that there hasn’t been enough federal help to enable a robust public-sector recovery is not part of the corporate media narrative. 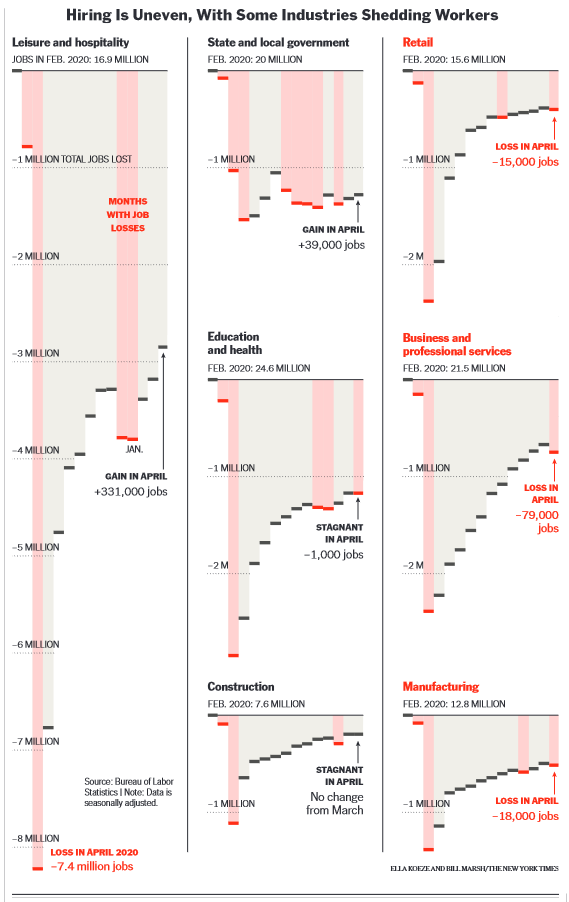 The New York Post (5/8/21) reported that restaurants are desperate to hire workers—but not so desperate enough to offer higher wages, apparently.

The Wall Street Journal editorial board (5/7/21) didn’t mince words when it denounced “government policies that have shoveled cash to consumers and rewarded Americans for not working.” “Most lower-income workers can make more sitting on the couch,” the paper sneered.

But the perspective of those workers and unemployed people are often left out of stories, or their quotes are buried beneath the partisan bickering over the jobs numbers and the complaints from businesses.

Before the job growth figures came out, media reported that business owners and managers were complaining of sluggish hiring. Many of these stories led with complaints from employers and analyses by economists. Sometimes these were followed by one or two quotes from workers—who offered the rationale that wages were too low for high-risk work in a pandemic, and that employers should consider raising pay—but these were often overshadowed by the perspectives of owners and analysts (Philadelphia Inquirer, 5/5/21; New York Times, 4/8/21, 5/7/21; Bloomberg, 5/6/21; Business Insider, 4/21/21).

More input from workers and labor advocates would add needed context to the narrative. Many labor advocates scoff at how many of these stories blame a “labor shortage,” even though the reality is that there are plenty of workers out there who just don’t want to work for low wages. It is unquestionable that the enhanced unemployment benefits and stimulus payments have offered an alternative for people who would otherwise take risks to work in a pandemic; it’s now possible for them to wait to return to work until vaccination rates increase and Covid-19 infection rates decline.

But some of the problems in job growth predate the pandemic. Consider the so-called “retail apocalypse,” the media’s term for a wave of closures in the brick-and-mortar retail sector (Atlantic, 4/10/17), especially among the titans of big-box stores like Sears (CNBC, 10/12/18) and JC Penny (CNN, 2/27/20). The prevailing wisdom is that these stores have suffered from the growth of delivery companies like Amazon, which is notorious for poor working conditions, including not letting workers use the bathroom (CBS, 4/5/21), and union-busting (Vox, 3/24/21).

There are many reasons why out-of-work Americans might not be rushing back to work right now: Mass transit is less reliable. For working parents, classrooms and daycare can close at any minute if there is an outbreak. Even if a worker isn’t in a high-risk group for Covid-19, they might have someone in their household who is.

And while the Financial Times believed that Covid-19’s seemingly low mortality rate wouldn’t create a worker shortage akin to the one after the Black Death, death isn’t the only factor. If a worker doesn’t have a good employer-backed medical plan, hospital care, ambulance rides, and days off work are financial burdens one might want to avoid.

Sarah Jaffe, author of Work Won’t Love You Back, noted that the narrative that potential workers are simply living off government payments is ill-conceived. She told FAIR in an email:

One thing I think getting missed is that the US decided to let everyone get laid off and do its subsidies through expanded unemployment, rather than the type of furlough scheme done in the UK, where the government stepped in to pay the wages so that people could remain in jobs. The result of this is that people feel no loyalty to old work and have every reason not to—so why return to those crap conditions? Your boss was happy to dump you off the payroll, possibly while getting a federal bailout, but now they’re complaining that you don’t want to come back?

Also: The first round of expanded unemployment gave people $600 a week extra. That was hardly eating-bonbons money, yet we heard about people having the ability to pay the bills for the first time with it. That expired, and I’ve spoken to workers who spent months wondering what would happen to them. The persistent story since the last crisis was pervasive underemployment—2008 wiped out a lot of middle-wage jobs and replaced them with low-wage jobs.

So the re-expanded deal was $300 extra a week—the equivalent of $7.50 an hour at 40 hours. These are not cushy benefits in the least! A one-time stimulus check of $600 and then another of $1,400 (which by the way a lot of people haven’t gotten, including, er, me) is definitely not “retire and watch HBO” money. What it is is exactly what unemployment was designed to do: allow people to have some breathing room before having to accept the first crappy job that came along. That’s the point of unemployment insurance, which we pay into so that it’s there when we need it. That this is some government handout is utterly ridiculous, and it harks back to the godawful days of the welfare queen narrative.

There’s another problem with the media coverage on recent hiring. The recent job numbers and the anecdotal reports of sluggish hiring are painted as bad news, not just with words like “disappointing,” but with the visuals that have accompanied these stories in places like the Washington Post and New York Times. But why is it such a bad thing that workers have increased economic options in the pandemic, putting them in a better bargaining position? Labor advocates have been fighting for an increase in the minimum wage, with some state and local success (CNBC, 1/2/20), though its prospects at the federal level died when Arizona Democratic Sen. Kyrsten Sinema infamously gave the boost a literal “thumbs down” (New York Times, 3/7/21).

Now workers might be in a better position to push wages up if employers are forced to compete with both the fear of the pandemic and increased unemployment payments. That most media portray this as a bad thing exposes an anti-worker and pro-boss bias.