Beijing. Jack Ma, the owner of China’s largest e-commerce company Alibaba and Ant Group and the world’s 25th richest man, has been missing for nearly two months. In October, in Shanghai, he sharply criticized financial regulators and state-owned banks. He had even told the usurer. This was followed by a dispute with Chinese President Xi Jinping. The Chinese government then announced an anti-monopoly investigation against his company.

There has been constant action since then, but now Jack Ma is nowhere to be seen, not even in social media and public events. The government’s tightening of the screws has cost them 11 11 billion from the end of October to December, or more than Rs 80,000 crore.

Elderly clubs are banking rules
Jack Ma urged the Jinping government during a program in Shanghai in October 2020 to make changes to the banking system that seek to suppress new efforts in business. Global banking rules were termed a club of the elderly.

How do you do that?
– Suspended his Ant Group’s 37 37 billion IPO in November.
– The ruling Communist Party government launched an investigation against his company.
– On December 24, Jack Ma was banned from leaving the country until the investigation was completed 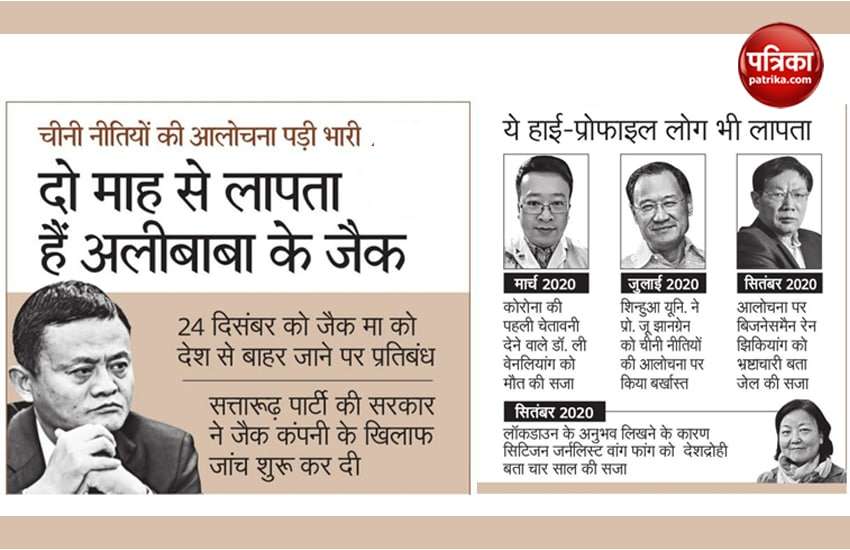 Out of his own TV show
– Removed names from the list of guests and speakers at the last minute from several events in December.
– Also out of the episode of the famous show Africa’s Business Heroes in November
– The picture was also removed from the poster of the show, the company producing the show belongs to him
– Three accounts on Twitter, not a single post for two months, used to tweet continuously

… so what will happen to Ren Zhiqiang …
Property businessman Ren Zhiqiang criticized Xi Jinping over the Corona epidemic. He called Xi Jinping a clown. He later went missing. He was later convicted of corruption after a wide-ranging investigation and sentenced to 18 years. Earlier, another Chinese billionaire Xian Jianhua has been in custody since 2017.