After a very framed and serious communication (too much, some would say) to prepare for the advent of the PlayStation 5, Sony wants to reconnect with its entertainment side and speak to all players in their variety. For this, the Japanese firm is entering a new phase of its communication, intended to be more fun and entertaining to speak directly to its community of online players. 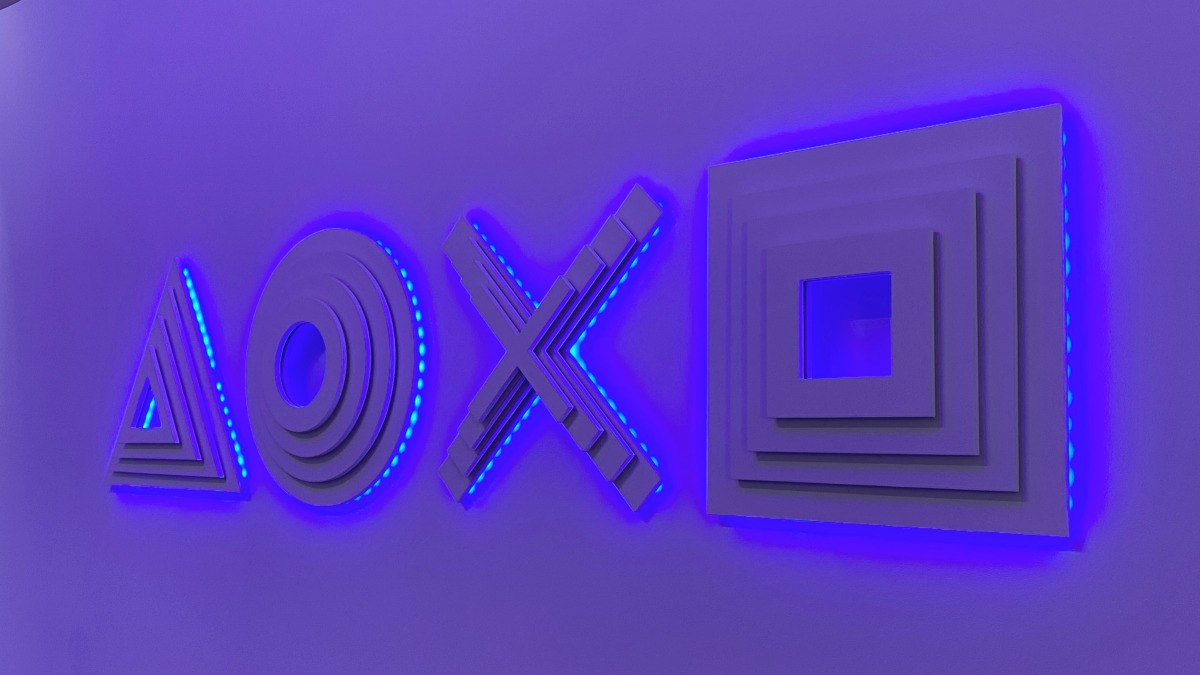 If you roam the social networks, you have undoubtedly noticed that, for several months, Xbox has been particularly offensive, has shown humor, derision and multiplies its online presence. What to try to mark the spirits before the arrival of the Xbox Series X and Series S, with a new more fun and daring line of conduct to convey its message.

At PlayStation, the strategy is quite different, more on tiptoe, very informal or wait-and-see, it is according to the perception of each one. A few trailers games, conferences and announcements broadcast online, somewhat technical or functional information on the PS5 and its DualSense controller on the official site, some clarifications (finally) on backward compatibility. Of course, Sony started TV advertising before Microsoft. But there are also some hiccups and official videos that have sometimes leaked before the time, even from within …

A communication far from the bluster of yesteryear of the PlayStation 2 (Ah, David Lynch’s strange ad for the PS2 or those bordering on censorship that followed…). Ultimately, nothing quite as entertaining as promised by what is shaping up to be its next entertainment hub. 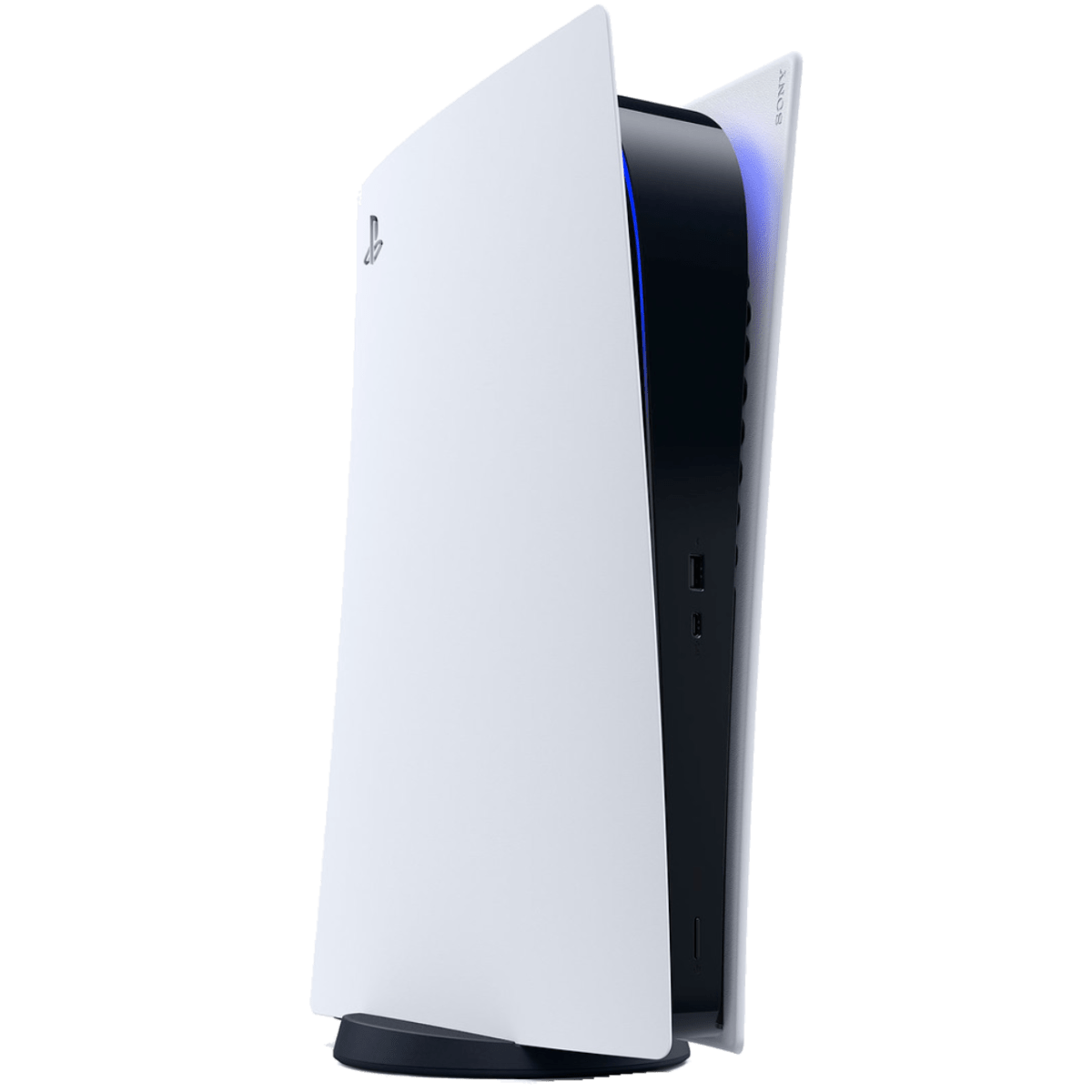 Getting back to the basics of entertainment

Entertainment: we admit behind the scenes that it’s a bit of a word that had been forgotten by the very serious communication around the PlayStation 4, the very one that currently serves as the basis for the next generation. Serious, efficient, sometimes very agreed, but which until then did not aim to conquer new users, the PS4 having raked tens and tens of millions of players quick to convert to its heiress.

Stop resting on your laurels while the competition is more determined! To gradually ramp up by November 19 and the arrival of the PlayStation 5, Sony is stepping up a gear, especially online and on social networks. For this, PlayStation is launching multiple video events that will unfold over the months to anticipate, support and follow the advent of new consoles. But not only, we understand from this new strategy. No question either of abandoning the PlayStation 4 and its players who will be around for a long time. So there will be something for everyone.

For four years, PlayStation France has had a YouTube channel that has long had the PlayZone program as its heart, left in stand-by since a few months. But the whole was far from the will of certainty of the brand. So Sony has revised its copy to find its fundamentals, bring entertainment with artists and shows scheduled all year. Because the battle of the next-gen will also be played there, on social networks where aficionados more willingly splinter to defend their champion. 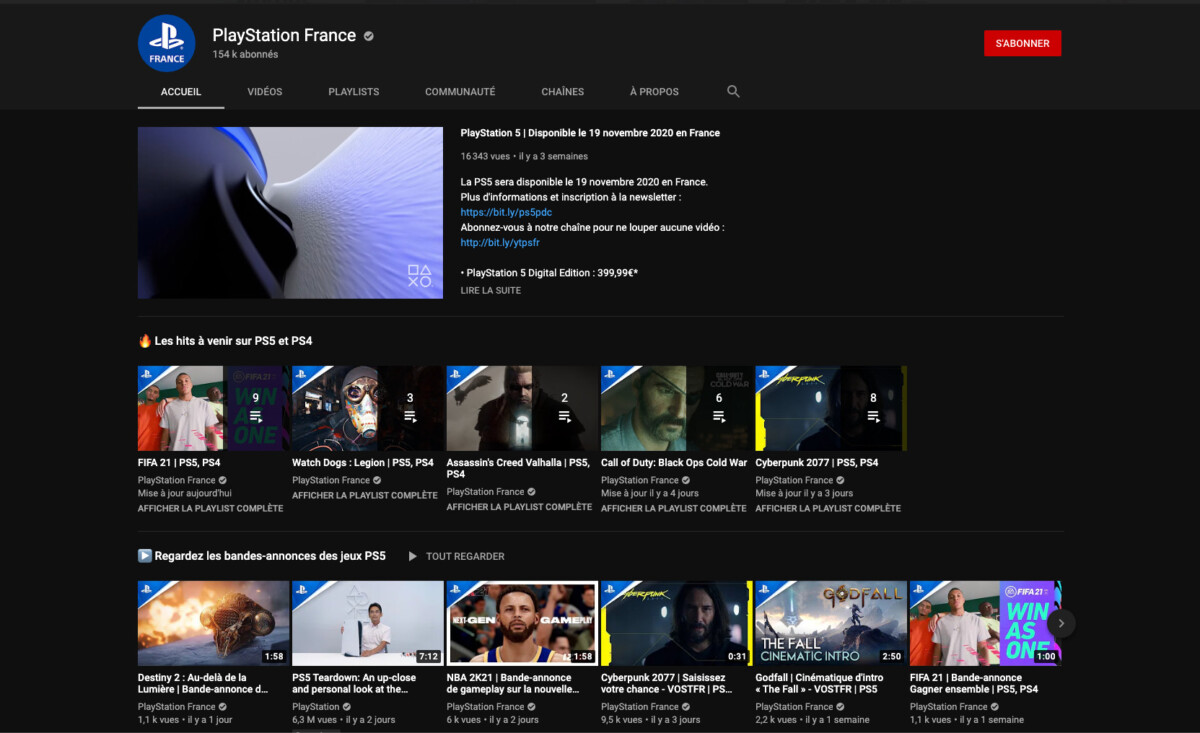 Shows to accompany the PlayStation 5, but not only

To energize its Youtube channel, programs for all ages, all targets, will emerge: tutorials on the main functions of consoles and controllers (from the end of November) to the monthly releases, of the PlayStation + and PS Now services (PlayStation Magazine) back to the history of the firm (PlayStorian) and even tips (Rage Quit) to avoid throwing his controller.

Attract young and old players alike by strengthening the bond they have with their console (s). It is also the way found to create a strong affinity with the brand. So, the player also finds himself actors with videos PlayStation Memories and the short stories of the members of the community, of the highlights of their life around the different consoles. Or Top X, a short and funny moment with player actions around a game, a theme, an era …

Other unexpected programs will also make their appearance such as an audio and video podcast (hosted by Salomé Lagresle) or even shows in ASMR baptized PSMR. The unboxing of the future console is also planned with a specialist in this new way of focusing everything on noise and sensations.

It is in a studio on the outskirts of Paris that PlayStation will also implement its new communication policy. A very large set of about 100 square meters, modular and decorated with the colors and acronyms of the video game company, was designed by the Dare-Win agency, also responsible for several shows. Consoles, controllers, PlayStation VR headsets, cross, round, square or triangle-shaped bases brighten up the place. But don’t go looking for the PlayStation 5 in the background, it’s not hidden there yet. You will have to be patient to track it in the background of future shows. 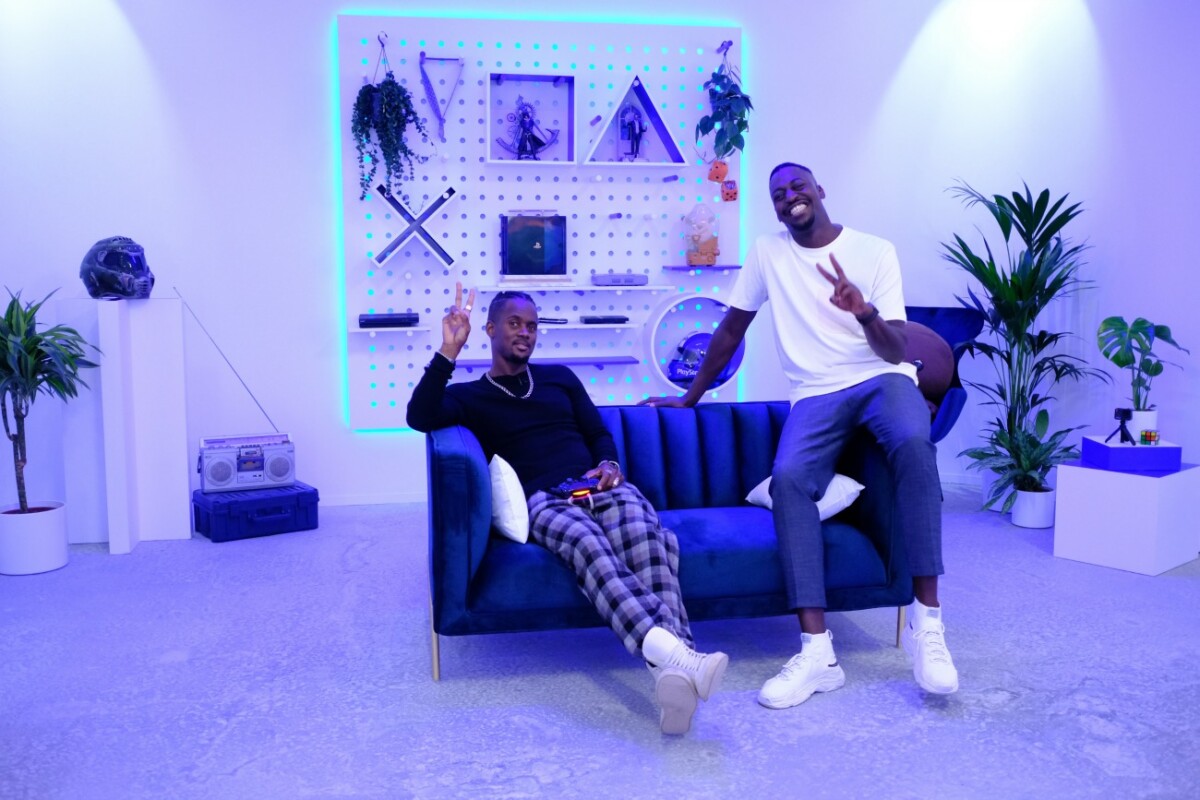 Heart of the new programming of the YouTube channel, the show Play arena welcomes singer Black M for his premiere, come to talk about his passion for the game FIFA. During a show about fifteen minutes, he will also stick to it with more or less success, but also with a lot of laughter and valves.

The presentation of Play Arena was entrusted to the comedian John Sulo, already seen as a columnist in Clique on Canal +. ” I am very honored to have been offered this. I’m a video game fan and a little geek », Explains this giant, used to stand-upand to the stage. ” With Play Arena, we test the limits of the guest, we challenge him with improbable challenges for fun, guests he was not expecting. The goal of the show is to have a good time, to discover another aspect of the guest through a game. Black M confided in us, we saw his other player personality . »The meeting will be monthly for at least five months.

A console for the whole gamer family

While the PS4 relied on its power and seemed to want to speak only to “seasoned players” at its launch, for several months, the message seems quite different: at PlayStation, we now want to talk to everyone and attract all fans. of video games, whether experienced or beginners. The very large and impressive success of the PlayStation 4 has made it think and rethink its strategy to adjust it to a very varied audience.

Focusing much of the communication around the DualSense controller, the tangible link between the game and all players, was already a sure harbinger. Promoting the power of the machine in the face of an Xbox Series X that has already been showing its big muscles for months no longer seems to be the primary will. We now want to talk about games and experiences at PlayStation.

The catalog of titles of the future PS5,Ratchet & Clank to a futureGod of War 5,moreover symbolizes this message and this new sought-after amplitude. Going to look for players and possible players on social networks is clearly part of this new communication policy which aims to be broader and general public. 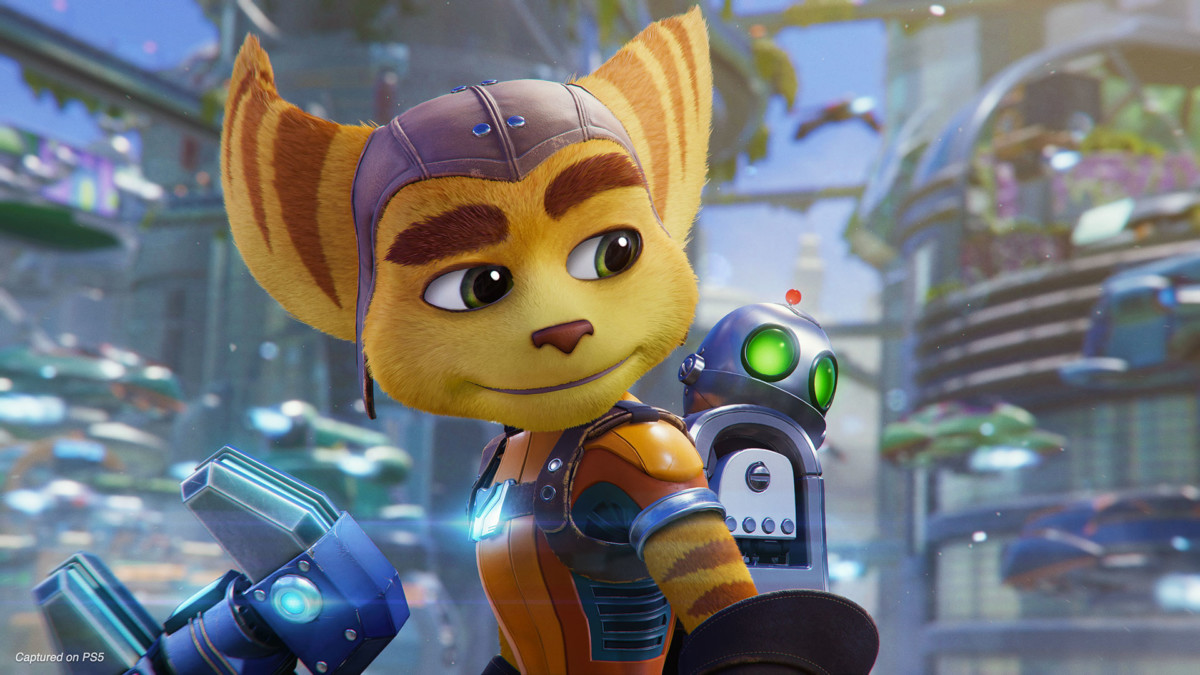 Soon, PlayStation will also tackle Twitch with the creation of a channel dedicated to streaming and live. The goal is clearly to go talk to the young PlayStation community who swear by their favorite streamers. We will find more or less professional streamers, tweeters also who would have a large community, and a lot of interactions, we are promised. New and old too so as not to forget its roots: Back to the roots aims to revive old licenses, even on PS1, PS2 or PS3, live. Attracting nostalgic people who might also have abandoned the more modern PlayStation, through their children who are more fond of videos if necessary, that’s always brought back into the Japanese fold. Potential future buyers of consoles as a bonus especially, and this remains the sinews of war.

Getting In The Game: How To Join The PC Gaming Revolution